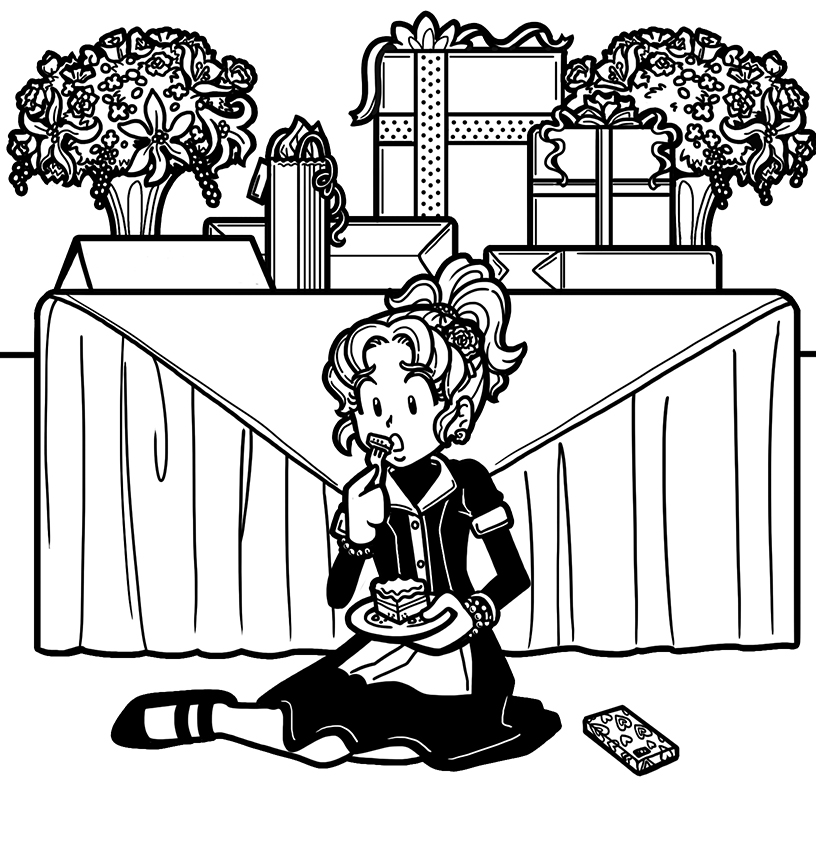 OMG! You guys are NOT going to believe this!!!

Remember our family road trip to my mom’s second cousin’s stepdaughter’s wedding? (Turns out her name is Kira.) I survived the road trip – in fact, I was the HERO of the road trip! I made sure Brianna was fed, watered, and kept happy!

THEN we arrived at our destination. And all my wedding dreams were DASHED!!!

(Well, not MY wedding dreams! My wedding won’t be for quite a while, people!!)

Kira’s stepmom wrote to my mom last week, telling her she wanted ME to be a part of the wedding, and that they’d have my dress for me to wear. We just had to show up. I thought it was a little weird that this girl who didn’t know me wanted me as a bridesmaid…and that it was so last minute…but whatever. I was going to be in a wedding!

Chloe—who knows way more about weddings than any other 14-year-old on the planet—said it was super weird that we didn’t have to be there for the rehearsal dinner. But hey! Maybe they wanted it all to feel spontaneous and not rehearsed. I didn’t care. I was going to be in a wedding!!

When we got to the church, I saw these gorgeous girls with professionally done hair and make-up, wearing beautiful purple dresses.  They were the bridesmaids, and they looked like they’d stepped right off the pages of a fashion magazine.  I was so excited that there was going to be a dress just like that waiting for me!!!

We found the wedding planner and told her who I was and she gave us a garment bag. I hurried into the nearest bathroom, unzipped the bag, and found…A MAID’S DRESS!!!

I’m NOT even kidding. Like, a plain black dress with a white apron over it!! This was NOT a bridesmaid dress!!! I burst into tears and my mom gave me a sad look and said, “Honey, did you really think you were going to be a bridesmaid?”

I guess she didn’t know. She just told her second cousin that I’d be happy to do “anything” to help. ANYTHING! My own mother basically volunteered me to scrape up all the bird poop after the crows got done with the birdseed people would throw at the bride and groom!!!

Okay, I didn’t have to scrape poop.

“Wasn’t Kira clever?” I heard one woman say to another as I cleared their plates. “They saved a bundle with a family friend doing the catering, but realized at last minute they’d have no one to serve. So they rented a few maid uniforms and got some volunteers!”

I did NOT volunteer!!!

And I made SUCH a big deal at school about how I was going to be IN a wedding! I even told Brandon!!

But I wasn’t going to let this be a disaster. The ceremony really WAS romantic and beautiful. And, I hid a piece of cake for myself behind the stack of gifts, since I didn’t have time to eat when everyone else ate.

When I was finally done clearing, serving and telling people where the bathroom was—like, I don’t KNOW, people!! Why don’t you find someone who REALLY works here???—I collapsed on the floor behind the gifts table.  Then, I grabbed my piece of cake out from behind the blender, toaster oven, or whatever other gift was inside the giant silver box.

And, when my lips closed around that first bite of chocolaty deliciousness, it almost didn’t matter that I was completely sweaty, my feet were about to fall off, and the rented maid’s uniform had a tag that was itching the heck out of my neck.

You know why? That cake tasted like LOVE. I’m not even KIDDING!!

So, I decided to own my awesomeness. I pulled my phone out of the dress pocket, and instead of complaining to my friends, I texted a picture of me, sweaty and exhausted, holding my cake and wearing my uniform.

I wrote, “Tastes like love!!!” and sent it off to Chloe, Zoey…AND Brandon!!! SQUEEEE!

Have you ever agreed to do something and it turned out to be a complete disaster?  Share your story below!