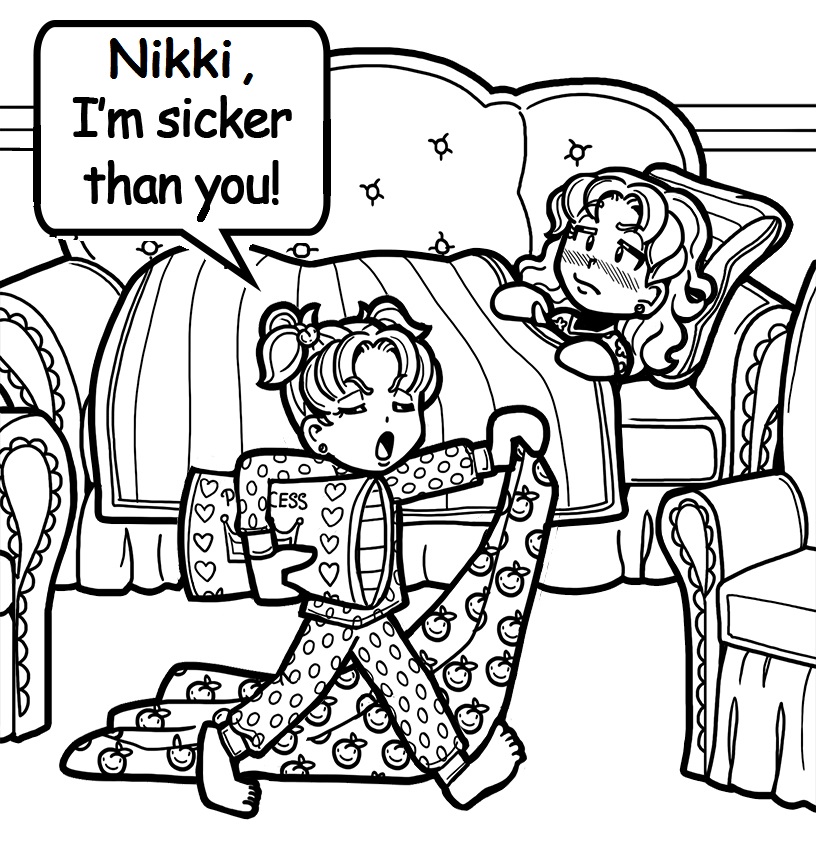 It is a beautiful spring day outside!

Chloe and Zoey are at the Art Festival downtown and they just texted to tell me they saw Brandon by the photography exhibits.

Okay, it’s not the plague. I guess it’s a cold. Or the flu. Whatever it’s called when EVERYTHING hurts, you sneeze so much that your noes looks like Rudolph, your throat is scratchy, and your head feels like Brianna is TAP DANCING ON YOUR BRAIN!!!
ARGH!!!!!

When I woke up feeling a little crummy, I thought, Cool! I’ll get to stay home from school! Not that it’s ever fun to be sick. But if I’m choosing between a math quiz and a day watching cartoon…

I figured my mom would take Brianna to school and my dad would go to work. I would have a day of peace!

INSTEAD, they all stayed home!!! I guess Brianna had been coughing and sneezing all night. My dad said his throat was feeling a little scratchy and rescheduled his appointments for the day. And my mom ran off to get chicken soup from the store!!!

At first I tried to set myself up on the couch. It’s the perfect distance from the kitchen and the bathroom, plus it’s right in front of the TV. I dragged my favorite pillow and blankets out there and got myself settled into a comfy nest.

And THEN Brianna showed up, demanding my spot on the couch! The NERVE of that girl!! I mean, SURE she sounded like she was about to cough up a lung on the carpet, but that was NO REASON for her to steal my sick-nest!!

My dad wandered through and said we had to take turns. So I pointed out the obvious: I WAS THERE FIRST.

You know why she gave in so easily? She immediately said, “Well if you get the couch, I get the remote.” And she plunked herself down on the floor and turned on Princess Sugar Plum!!!!

This girl always drives me CRAZY but if I stayed there, she was actually going to KILL ME.

So I gave up my sick-nest and dragged everything back to my bedroom. I had a sneezing fit on the way and—I’m not even making this up—I sneezed eleven times in a row. ELEVEN!!!

Anyway, I settled back in bed and sent texts to Chloe and Zoey. I knew they were in school so it might be a while before they answered. When they DID answer, they said that they were going to this Art Fair thing tomorrow after school for extra credit points. And, they were hoping that I would feel better so that I could come with them, so they told me to get well SOON!
This is SO unfair!!!

Now, I’m hoping my mom’s (store-bought) chicken soup is some kind of miracle cure. There is NO WAY I’m staying home from school tomorrow!!!

If you have any ideas for how to recover quickly when you’re dying from the plague, tell me in the comments!