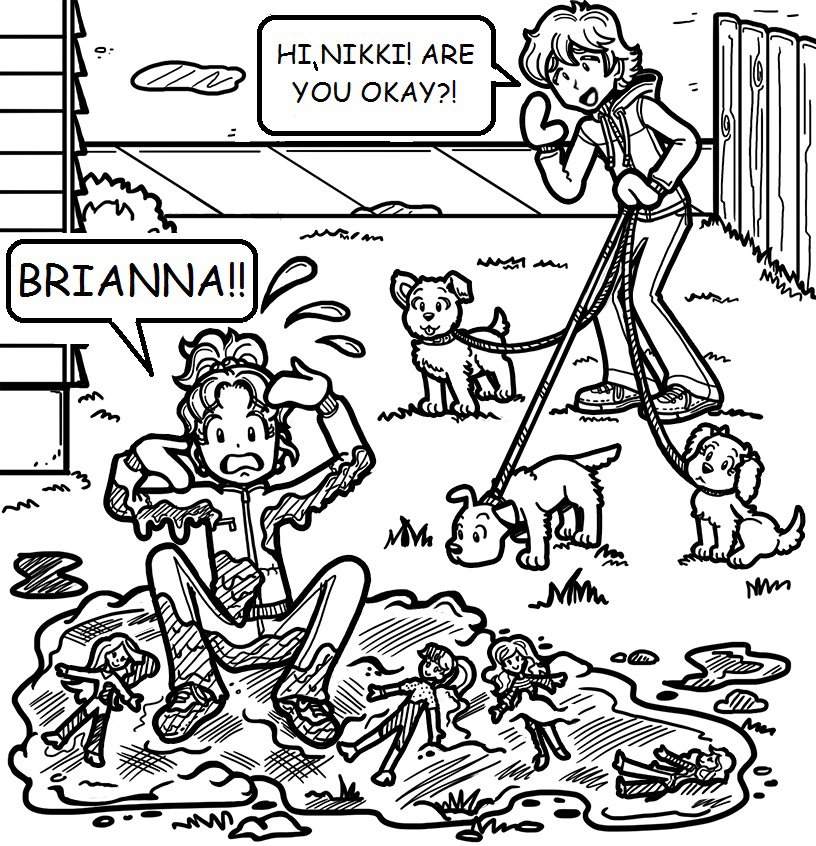 Remember that nice moment I had with Brianna a couple weeks ago, when we saw the first flower of spring?

SOMEHOW, that made me think I should volunteer to help my parents prepare the vegetable garden in the back yard for spring planting. Don’t even ask me WHAT I was thinking. My homework was done, the sun was out… What can I say? I had a moment of PURE insanity!!!

It started off okay. Mom and I were pulling weeds and Dad was hauling two huge bags from the van. Brianna was pouring water into a patch of mud and calling it Lake Bri-Bri.

It was nice to be outside. We were actually having family sharing time that didn’t make me want to run screaming in the other direction. I started to imagine that maybe one day Brandon would come over and hang out at my house and I wouldn’t be COMPLETELY mortified by my family.

Suddenly, Dad crowed like a rooster and shouted, “Nothing like the smell of manure in the morning!”

I think the WHOLE neighborhood must have heard him!!!

WHY are dads so embarrassing?!?!? I don’t even know.

My mom shook her head, like she was a little embarrassed too. But she was also smiling, so who knows. She could have started oinking like a pig and I wouldn’t have been surprised. I had to make my escape.

I’d already been helping for a whole twenty minutes. But rather than argue with him, I thought it would be simpler to do one more thing and THEN make my escape without arguments.

“Okay, Dad,” I said. “What is it?” I tried to ignore the fact that Brianna was now clucking like a chicken as she arranged her Barbies along the shore of Lake Bri-Bri. (Which, btw, was actually a big muddle puddle!)

Dad placed the two huge bags in the garden. “Open these two bags up and spread them around the garden.”

That seemed doable. Open and spread, then I’d be done.

But, then I saw the labels on the bags. One was potting soil, and the other was compost. Compost!!

Do you KNOW what compost is??? It’s poop!! Mostly cow poop! We learned about it in science last year. And, do you know how it SMELLS?!?!?  It smells AWFUL!!!

“It’s good for the soil,” my dad said, as if THAT was going to convince me. “It helps the plants grow!”

He walked right over, stuck his hand into the poop bag and pulled out a handful. In his HAND!! He was wearing gloves, but STILL!!!

“Now Nikki,” he said. “You are not the type of person who gets all worked up about getting her hands dirty. There’s nothing to be afraid of. Brianna’s not afraid, are you, honey?”

Brianna came clucking over and stuck HER hands into the poop bag. She pulled them out triumphantly and flung compost (cow poop!!) EVERYWHERE! Some of it hit my FACE!!!”

“Oh, honey!” My mom leapt up and dashed over. “Brianna, don’t throw the compost.”

But Brianna waved her poop-covered hands in the air as she ran away from my mom. Manure was flying EVERYWHERE!!

“Cow poop!” she cackled, throwing in a chicken cluck every now and then.

“AAAAAAAHHHHHHHH!” I screamed, trying to shake the compost (cow poop!!) off of me. I was going to stomp off dramatically.

INSTEAD, I tripped over Brianna’s Barbie dolls and ended up on my hands and knees in Lake Bri-Bri.

And THAT’S when I heard someone say, “Nikki?”

Only it wasn’t my mom, my dad, or my cray-cray little sister.

He was standing there, all adorable, with a bunch of Fuzzy Friends dogs on leashes.

I scrambled to my feet, but as soon as I was up, I wished I’d stayed down. I was COVERED in mud! (And cow poop!)

It was SO embarrassing!!!

Apparently, we were going to pretend I didn’t smell like a pigsty!!

“Yep.” He pushed his hair out of his face, and then we stared into each other’s eyes. I could have stood there forever. (Even covered in cow poop!)

Then, my dad interrupted and started asking Brandon questions about his grandpa’s prize rosebushes.

When Brandon left, I took the longest shower in the history of the world. I think I stayed in there for like, THREE HOURS!! I can still smell the cow poop.

But, at least I got to see Brandon!  Squeeeee!!