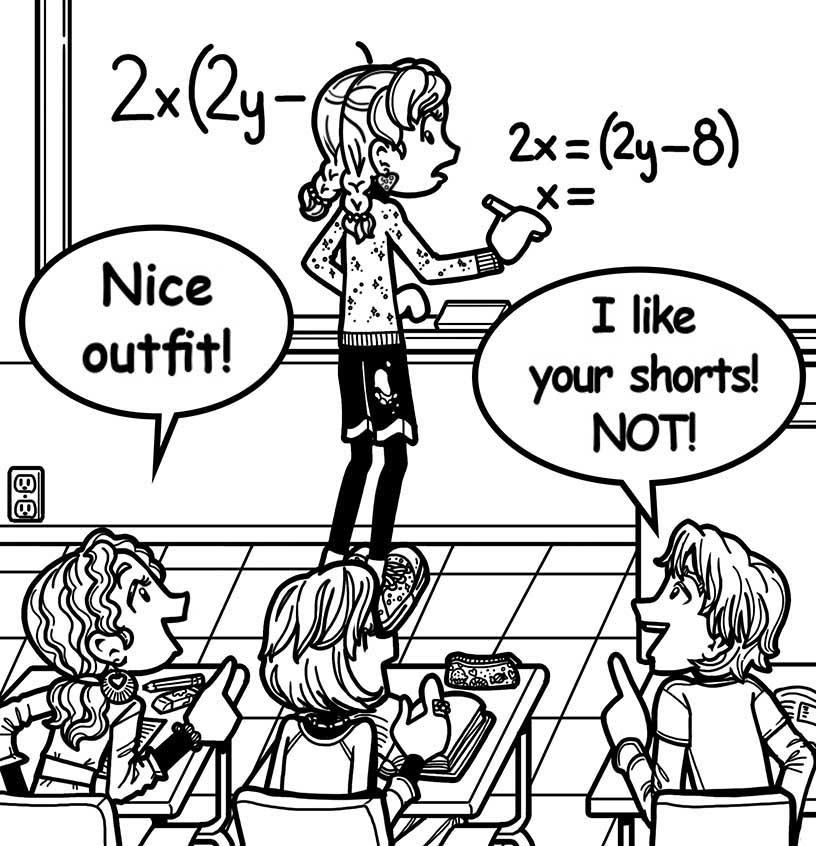 What happened today was so humiliating that I’m almost too mortified to tell you guys. ALMOST! Here’s what went down….

This morning, I decided to wear these skinny jeans I bought over the weekend with this cute, sparkly sweater.

I’m not usually into jeans that are so tight, it looks like someone painted them on my body. But they seemed kind of stretchy, and Chloe and Zoey said they looked cute on me, so I went for it!

All day, people complimented me on them. Marcy said, “Dang, girl! You look FIERCE!”

I LOVE when people call me “fierce”! Beyonce says that when she performs, she pretends she’s someone else named “Sasha Fierce,” and she’s all kinds of awesome onstage, so I think that’s a HUGE compliment!

OK, so that’s not a compliment, but in a guy world, noticing ANYTHING related to fashion is a pretty big deal!

Even one of my teachers noticed my look. She said, “Ms. Maxwell, what an arresting ensemble!”

Actually, I had no idea what that meant until I got home and Googled the words, but I assumed it was something good, so I smiled and said, “Gee, thanks!”

I was feeling pretty great all day…until gym class!

Before class, I pulled out my gym clothes in the locker room and noticed that my baggy grey shorts were covered in stains. They looked like my mom had accidentally washed them with white stuff, getting bleach marks all over them.

I was standing there, staring at my shorts, when I heard my teacher yell, “Maxwell! Dodge ball. NOW!”

Everyone was waiting on me, and I’m really bad under pressure, so I got changed really fast and ran out!

I know what you’re probably thinking: the embarrassing thing was playing dodge ball in those shorts, and MacKenzie made it worse by saying something evil, like, “The homeless man from downtown called…he wants his shorts back!”

Well, yeah, that was pretty embarrassing! But I had a long T-shirt on, and I didn’t think about my shorts too much because I had a BLAST in the game! I REALLY hustled and got a ton of people out.

I even threw the winning ball, and then everyone on my team started cheering, “Nikki! Nikki! Nikki!”

The REALLY embarrassing part was after that! Since I played so aggressively, I sweat a TON. And I wasted a lot of time at the end of class basking in all that cheering.

I only had two minutes to change before my next class, so I tried to do it really fast, but my legs were so sweaty that I couldn’t get them into my skinny jeans!

I thought they were stretchy before, but now they felt like they were made of leather. I got them up past my calves, but then they got stuck.

Since my T-shirt was pretty drenched, I put on my purple shirt, but the jeans just wouldn’t budge!

Eventually, the bell rang, and I heard my gym teacher yell, “Maxwell! Out! NOW!”

I had no choice: I had to go to my next class wearing my sparkly sweater and my bleach-stained gym shorts!

I looked TOTALLY ridiculous! I carried my jeans in my backpack so I could change in the bathroom as soon as my legs cooled down a bit. But I didn’t want to leave class to do that, because then I’d have to get up and walk past everyone, and come back wearing something else!

Luckily, I was able to change right after that class, but not until after Brandon saw me in the hallway and said, “Hey Nikki. Were you wearing something different before?”

I told you! Guys hardly EVER notice clothes!

The whole thing was SUPER traumatizing, so it’s official: I am NEVER wearing skinny jeans again!