THE MOST EXHAUSTING SATURDAY EVER 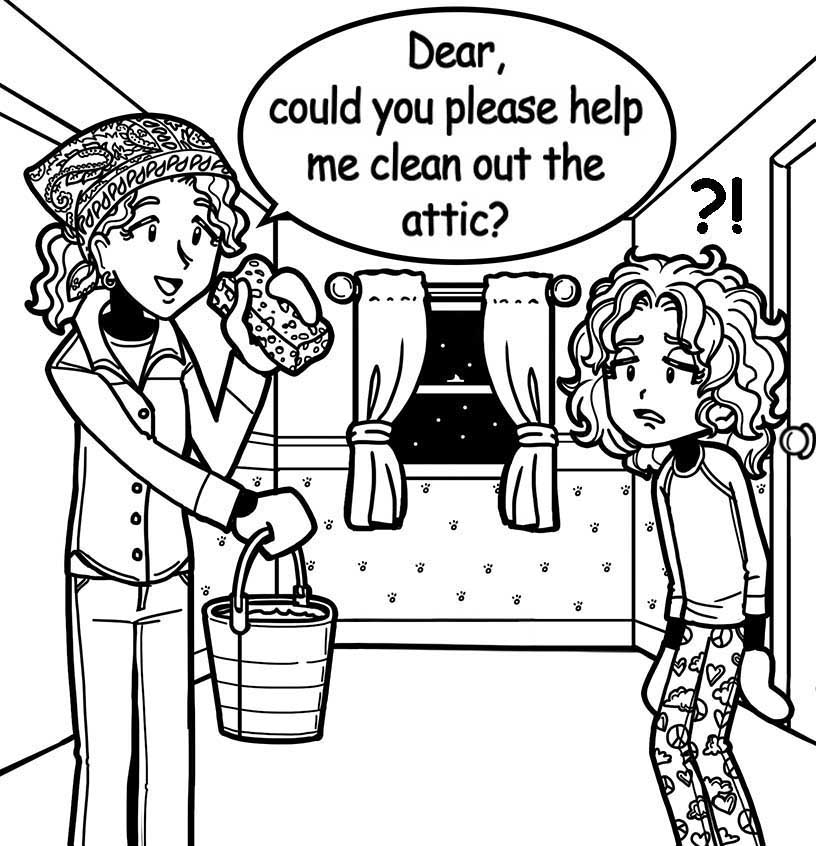 This Saturday was supposed to be a super relaxing day, but it was a TOTAL nightmare!!!

It started when I got out of bed at 5:00AM to use the bathroom. It was still dark outside, and my mom was all, “There you are, dear. Can you help me clean out the attic?”

I chuckled and said, “Yeah, right. OK, sure!” I didn’t think she was serious! But sure enough, she was back at 6:00 with a bucket and a sponge, like I was little orphan Annie and I had to earn my keep!

To make matters worse, she was SUPER critical of my cleaning. She doesn’t like to seem demanding, so she said it all in a sweet voice. But, even when you sing, “You missed a spot!” it sounds TOTALLY annoying!

You’d think that would have been bad enough, but at 7:30, my dad poked his head through the attic door and said, “Hey, Nik! When you’re done here, can you come help me with the car?”

But instead, I said, “Um, seriously? How can I help you with the car?”

He answered, “I mean help me CLEAN it. I need that bucket you’re using…and since you’re doing SUCH a good job, I need you too!”

I REALLY didn’t want to have to clean anything else, but I also didn’t want to be the world’s worst daughter, so I said, “Um, sure. I’ll help you when I’m done.”

That wasn’t until 10:00. I was really anxious to finish the car quickly so I could do a whole bunch of nothing, but my dad wasn’t having it.

He kept saying, “Stop rushing! A job worth doing is worth doing right!” and “Come on! I hired you because you’re better than this!”

By “hired,” he meant “manipulated,” because it’s not like I applied, and I definitely wasn’t getting paid!

We were just about done around 10:45, when I heard, “Nikki, would you be a dear and help me clean my bath tub?”

It was Mrs. Wallabanger, standing on my front lawn wearing a shower cap and holding one of those spongy back scrubber thingies.

Then she said, “Your mom said you’d love to help. Such an angel, you are.”

I didn’t know who I was more annoyed with: Mrs. Wallabanger for asking me to do something else when I was SO tired (and tired of doing stuff), or my mom for saying that I’d LOVE to get on my hands and knees in her tub!

So I said, “I WOULD love to help, Mrs. Wallabanger. Really, I would. But I’m kind of tired so…”

Then I heard my dad clear his throat super loudly, and I looked over to see his eyes bulging out of his head, like they were trying to escape from his eye sockets. That’s his crazy mad face. I knew he thought I was being rude, but I really didn’t want to say what I said next…

“Sure, I’ll scrub your tub. Go get your rubber ducky, because you’ll be soaking in that thing in no time!”

It was about noon when I finished helping her. Yup, it took over an hour!

That’s because she was a backseat scrubber. (In case you don’t know, a backseat driver is someone who ISN’T behind the wheel who keeps telling the driver what to do.)

She stood over me the whole time and barked orders, like “Put a little more elbow grease into it!” and “Scrub it like you mean it!” (Which makes no sense. You can’t really “mean” scrubbing!)

At 12:30, when other people were just waking up after sleeping in, I was absolutely EXHAUSTED! I’m GLAD they all think I stink at cleaning…because maybe they’ll never ask me to clean anything again!