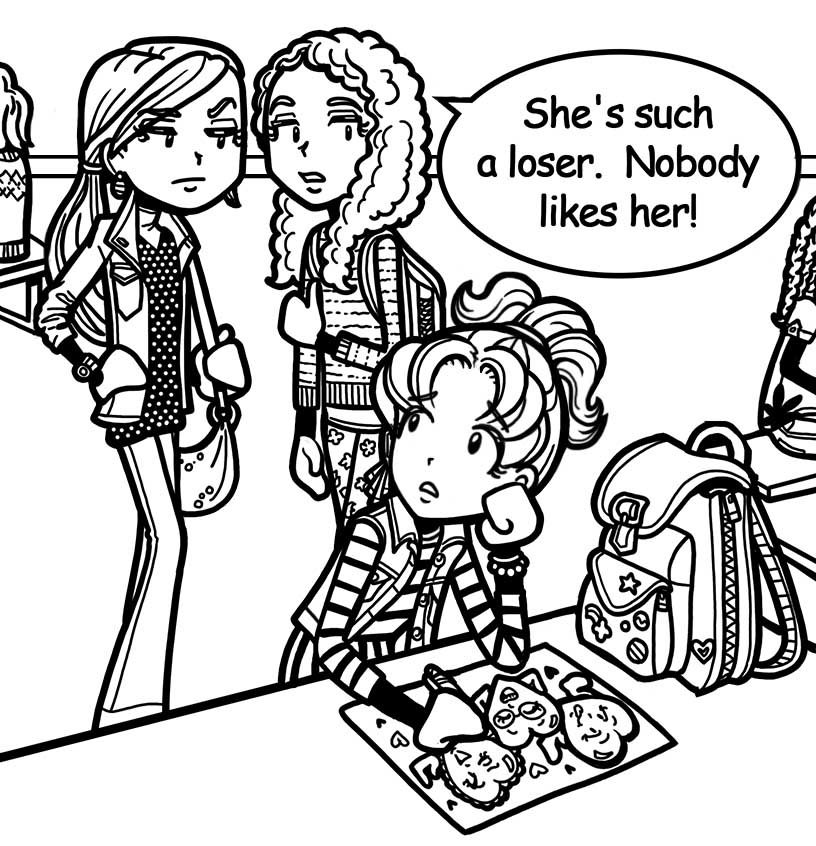 Remember how MacKenzie gave me a gift because her mom made her, after MY mom said something about me in their spin class?

I found out what she said, and I am SO totally annoyed!

I was sitting by myself in lunch yesterday because Chloe was out sick and Zoey was doing something in the library.

I was going to sit with Marcy, but she was talking to one of her teachers, and it looked kind of important.

I didn’t really mind sitting by myself. It’s not like I need people to entertain me 24/7.

It’s kind of nice to chill alone sometimes. I get to doodle, fantasize, and just be in my own little world.

I had my diary out and I was drawing these little hearts with arms and legs. I’m not usually a heart doodler, but I was thinking about Valentine’s Day (which is coming up soon…squeeeeee!!)

Then I decided to make them look like heart versions of Chloe, Zoey, and Marcy. So, I gave one long hair, one short hair, and one glasses.

And then, because they’re hearts, I wrote, “We love you, Nikki” in a dialogue bubble on top.

I realized it was kind of silly, so I started laughing a little. Then I heard, “It’s so sad…she’s SUPER desperate for people to like her!”

I turned around to see who said it, but I didn’t see anyone there.

Then I heard someone else say, “Look at her pretending she has friends.”

And then someone said, “She’s SO delusional!”

Since the lunchroom was crowded, and lots of kids were talking about lots of different things, I had NO IDEA who was saying that stuff about me.

But I knew this for sure: I looked like a TOTAL loser!

Toward the end of lunch, I met Zoey in the janitor’s closet and told her all about it. I asked her why people would say that stuff about me, but she was stumped, just like me!

She had to run back to the library before lunch ended, but I didn’t want to go back to the cafeteria, where everyone seemed to think I was some kind of friendless freak!

So, I decided to stay in there until the bell rang, eating a bag of Cheetos. Since I’m the world’s biggest klutz, I spilled them all over the place, so I grabbed the broom to sweep up my mess.

I started muttering out loud, “Why would people say that stuff about me? I have friends! People like me!” Then, because I’m a huge dork and I was being silly, I held the broom out and said, “You like me, right?”

RIGHT THEN, the janitor opened the door and a bunch of girls started laughing at me. I heard someone say, “MacKenzie was right. That girl’s a social reject!”

I was SO humiliated!! They actually thought I MEANT it when I asked the broom if it liked me!

At least now I knew that all this stupid drama came from MacKenzie. (Big shocker!)

I stormed over to our lockers, where she was smothering her lips in lip gloss, pulled it out of her hand, and whisper-yelled, “What rumor did you make up about me?? Why does everyone think I have no friends?!”

But since I was super emotional, I ended up yelling the “no friends” part, which EVERYONE in the hallway heard.

Then she said, “You poor thing! Everyone feels SO bad for you! It must really stink to be so PATHETIC that your mom tells anyone who’ll listen how lonely you are!!”

THAT was what my mom told her mom…that I’m lonely! I had no idea why she’d say that, since she knows Chloe, Zoey, and Marcy are my good friends.

Then I remembered one night during the holiday break when everyone was busy but I really wanted to do something. I said, “I am SO annoyed and lonely!” And my mom ended up taking me out for hot chocolate.

I meant I felt lonely RIGHT THEN…not all the time!