WHY I CAN’T STOP DOING MY SNOOPY HAPPY DANCE!! 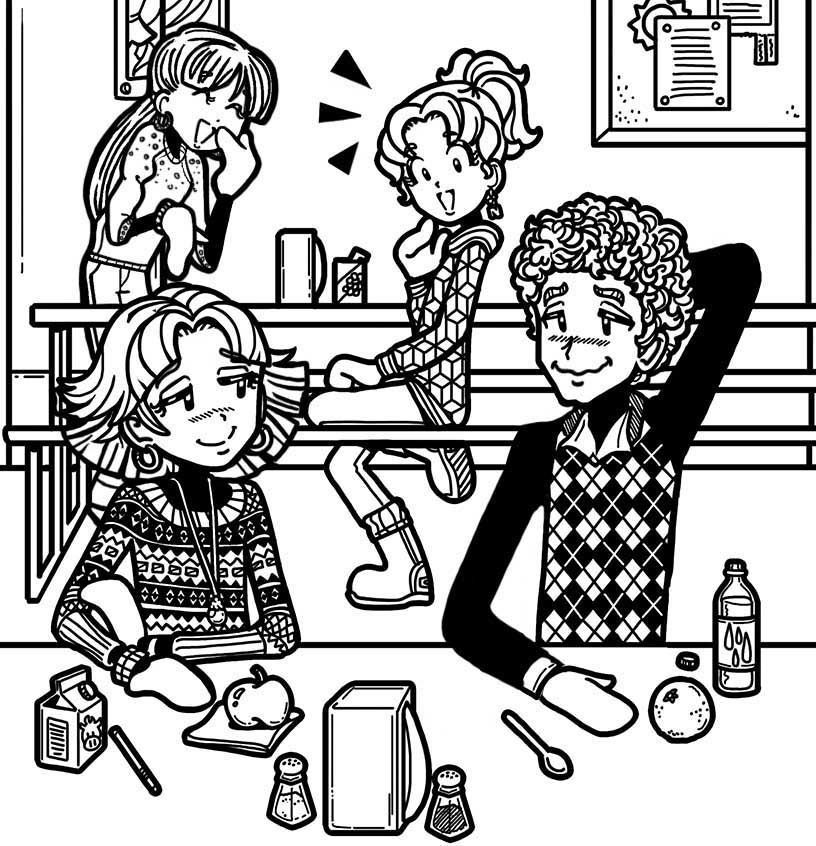 Back! OMG, I am SO flipping psyched!!!

Our school’s holiday dance is this Friday night, and I know what you’re thinking. I must be excited because I’m going with Brandon.

Well, duh! That IS pretty awesome! But that’s not why I’m so giddy.

I’m super excited for Zoey! She’s been feeling kind of bummed lately because no one asked her to go to the dance.

Seriously, she’s been SO sad and out of it that she’s been walking around like a zombie.

In the library this morning, I took a banana out of my backpack, put it to my ear, and then handed it to her, saying, “Your energy called and he wants you back!”

I don’t know why I didn’t use my ACTUAL phone for this joke. Fruit’s not THAT much funnier!

But it could have been a diamond-covered iPhone with a text from Harry Styles and she wouldn’t have noticed…because she grabbed the banana and put it on the shelf between The Giver and Harry Potter, like it was a book!

I felt so bad for her….until lunch!

While I was throwing gummy bears in the air and trying to catch them in my mouth, I accidentally hit this boy in the back of the head. (And his head was NOWHERE near my mouth…I have HORRIBLE aim!)

When he turned around, I thought for sure he was going to be super angry looking. That’s when I saw it was Theodore, Zoey’s crush, and he had this HUGE dorky grin on his face.

Then he said, “That’s a beautiful sweater, Zoey.”

And she said, “Thanks. I like your…” and paused, like she was having a hard time thinking of something to say.

Seconds were going by, and it was getting super awkward, so I coughed the word “shoes.”

He was actually wearing beat-up old sneakers, but someone had to say something!

Then Zoey finished her sentence with, “…shoes. They look really…durable.”

He must have been nervous, too, because he responded, “Yeah. They are. Yours look durable, too.”

Then she said, “Yours also look really…thick. Um, what kind of socks do you wear with those?”

And he answered, “Um, just the usual kind. Unless I’m in gym. Then I wear my gym socks. Because it’s gym.”

This was the world’s most AWKWARD conversation! But it didn’t matter one bit. They were looking at each other with big, googly, puppy dog LOVE EYES!

After that, Chloe and I decided to give them a little space so they could continue verbally co-writing the most boring book ever, Random Facts About My Footwear, as a totally dorky means of flirty.

I knew it was the right thing to do, but I REALLY wished I could crawl under the table to hear the rest of their conversation! (No, I wasn’t eager to hear about their heavy-duty laces…I just had a feeling it would EVENTUALLY get good!)

The SECOND I saw Zoey in last period gym class, I knew something totally awesome happened, because she was practically skipping, and she was smiling so big I could hardly see her eyes!

Before she could get a word out, I squealed, “What else did you guys talk about?!”

I had a feeling I already knew the answer, and I was right.

Theodore asked her to the holiday dance!

I’m SO excited for her!

If I could only get ONE thing for Christmas, this would be it…to see Zoey this happy!

(But luckily I can get more than one thing because I REALLY want this sweet turquoise watch, Just Dance 2015 for Xbox, and a sparkly iPhone case!)